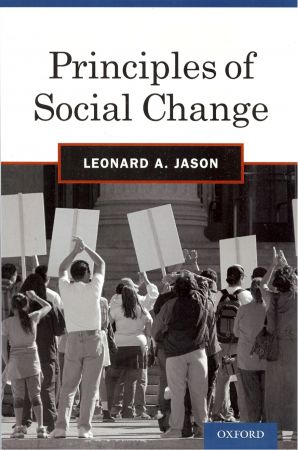 Successful change agents must have knowledge, a sense of intuition and urgency to solve complex problems. This is the theme of Len Jason’s new book, Principles of Social Change. It is a wonderful and refreshing addition to the community psychology literature, and indeed to the broader social change literature. His social change model involves both the presentation of scientific/research information on the issue, partnered with vigorous advocacy. He demonstrates the critical role of both science and intuition to the change process. What a refreshing acknowledgement of the role of these powerful forces.

The basic premise is that there are five principles to the social change process:

These five principles are illustrated using three different and very comprehensive community interventions that Len Jason has created and stayed with for decades. In each area, his work has had significant impact.

Tobacco prevention: Len’s pioneering work in the area of tobacco prevention focused on enforcement and reduction in accessibility to illegal tobacco for young people. State efforts to reduce youth access to tobacco ultimately led to a 21% decrease in the odds that tenth graders would become daily smokers. Variations of this framework were adopted by the World Health Assembly representing 90% of the world’s population.

Chronic Fatigue Syndrome: With this issue Len’s initial interest is very personal; he was diagnosed with chronic fatigue syndrome. He then became a student of the disorder and a researcher and activist. It began with challenging the “misguided estimates (of prevalence) of the CDC”.  His work went on to focus on the stigma of the illness, the misnaming of the disorder, the research agenda and much more. In this area, as well, Len is seen as a national leader.

It must be noted for most professionals any one of these areas would have been a life’s work. For Len he made significant impacts on each and (as noted in a chapter on his history) doing this while coping with chronic fatigue syndrome.

Each of these three major pieces of work has been well published in the professional literature but Len declares that we need to go beyond publication to create change. As early as his work on issues of tobacco control he partnered with legislators and even challenged Mayor Daley, the legendary mayor of Chicago, in a published editorial.  With chronic fatigue he went head-to-head with the Center for Disease Control. Advocacy comes naturally to Len and he does it persistently on his projects. Len has also presented testimony at Congressional hearings.

Len’s first principle of social change involves seeking the root cause of the problem and then working to change the social environments. He notes that “redistributing power is often a crucial component of successful large-scale, second order social movement” (p. 29).
Along with Len’s deep commitment to science and documentation of his successes throughout the book he refers to the important role of intuition in creating social change. For example he suggests that you   “trust your instincts when you sense imbalance and discrimination in a system or that people are being treated unfairly” (p. 24). Decisions that are made based on intuition can often be as good as, or even better than, ones made from a slow deliberative process. Jason expands on this in describing his work developing a scale on wisdom that includes measures of harmony, warmth, intelligence, connection to nature and spirituality.

Principles of Social Change is more than an excellent text on social change; it allows us into the thinking and world of Len Jason. The reader can’t help but be moved by the author’s contributions. Len’s passion and doggedness are remarkable, as is his focus and commitment. These are traits too rarely seen in the academic pursuit of social change. His description of the requirements for excellence as a change agent is also wonderful: he notes that these folks will need “passion, intuitiveness, endurance, and understanding of principles of social change.” He explains that social change agents will endure many assaults and must have “dogged optimism, community support and spiritual beliefs as a shield.” Len Jason clearly has all of this and more.