When Environmental Justice Meets Social Justice: The Case of Maternal and Infant Vulnerability after the Nepal Earthquake 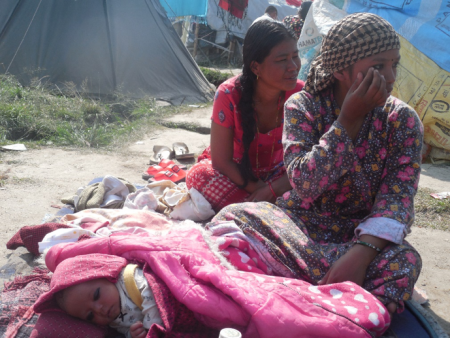 “She had to sell her land to pay for the ambulance to deliver her baby,” a graduate student from Norway said to me as she leaned across the seat of the van as we made our way down the dusty road from Bhaktapur to Kathmandu. My Nepalese research partner and I were on our way back to Kathmandu after visiting a pediatric hospital that was conducting community-based research in nutrition and infant health. Along the side of road, there was a line of cars that stretched for several kilometers, all waiting for fuel. During the fall of 2015, only seven months after the devastating earthquake in April, Nepal was experiencing a serious fuel crisis. The crisis began when India halted the flow of fuel into the main import route through the Terai region of Nepal. The impact of the fuel crisis and the earthquake on maternal and child health was already beginning to become evident in instances such as the dilemma described by my Norwegian colleague.  Prior to the earthquake, women in Nepal already faced barriers to basic health and wellness, especially in rural areas, where getting prenatal care meant a grueling 5 or 6 hour walk through steep hills and rocky terrain to the nearest health post. When Nepal experienced a devastating earthquake that killed nearly 9,000 people and left hundreds of thousands without homes in April of 2015 (Nepal Planning Commission, 2015), the damaged and destroyed structures also included these health posts that provided vital family planning and pre and post-natal care services. This crisis highlights the need to link social justice to both environmental justice and public health in order to advance solutions for often neglected populations.

Through the support of the SCRA community mini-grant and funding from the Colorado Natural Hazards Center, we collected data on the ways that women made decisions about infant care and infant feeding during the weeks and months following the 2015 earthquake. The data were gathered in semi-structured interviews in four relocation camps throughout the Kathmandu Valley area (although one of our data collection sites was located in the western area of the Sindhupalchowk district). During this time, we also observed how life and daily living was impacted in the Valley during the height of the 2015 fuel crisis. Through the combination of data collection and observations, we identified three main themes related to health and welfare of Nepalese mothers and their children: 1) health and well-being, 2) exposure to pollutants and pesticides, and 3) social factors.  Environmental justice, poverty, and health intersect for Nepalese mothers and their children in these three main ways.  The first way in which these factors are linked is through the manifestation of the built environment and its impact on health and well-being. This also includes aspects of the physical landscape that prevent safe and timely access to health care. The second way is through the continuous stress placed on women and their infants caused by daily life that includes risks such as exposure to indoor and outdoor pollution and other hazards. The third way that women and infants are at risk is through social-factors that may hinder women’s agency in areas such as breastfeeding and family planning. This factor is the most complex because while globalization may create new opportunities for access to technology and information, it may also increase exposure to consumerism associated with Western ideals- such as bottle-feeding. Here we provide a brief example of how these three environmental linkages impact social justice for women and children in Nepal.

Common news headlines after disasters often include statements such as, “This earthquake did not discriminate, it killed all types of people.” However, this is only partially true. When an earthquake, hurricane, or tsunami occurs, poor people living in physically vulnerable areas are more likely to be killed and experience significant losses (Fothergill and Peek, 2004). People in Nepal who lost homes due to the earthquake were more likely to have materials for rebuilding if they were land-owners. A tangible example of this was reflected in the variation of relocation settlements we encountered during our fieldwork. When the settlement of homes was built directly upon the same land that the families owned prior to the earthquake they tended to be more robust, consisting of corrugated tin rooves and brick walls (See Figures 1 and 2). These types of re-built structures are vastly different than the tarps and tents that earthquake victims without land are using in major rural resettlements. Additionally, cooking with firewood was common in the autumn months of 2015 due to the fuel crisis (most households normally use oil for cooking). Although both types of structures lacked optimal insulation and venting systems, building a wood fire inside of a tent increases the chance of a fire or smoke inhalation. The corrugated tin and wood structure also provided more protection from water, wind, and cooler temperatures. During our fieldwork in November, one of the main concerns for health and well-being was that infants and children were too cold at nighttime.

Figure 2: Tents of Victims without Land

Exposure to Pollutants and Pesticides

The ways in which women engage in care-taking activities in Nepal is driven by daily working patterns (Paneru, 1981). Women often need to take their babies into the fields with them, and this means that the baby may be exposed to pollutants and/or pesticides (Morello-Frosch and Shenassa, 2006), among other hazards. In this way we can see that environmental justice is inherently linked to physical well-being (Taylor, 2000). Certainly,

this is true in Nepal, where social location (i.e. caste) as well as geographic location (urban rural, plains, mountains) makes women and children differently vulnerable in different parts of Nepal. Adding to this, Kathmandu was recently named as the third most polluted city in the world (Thapa & Adhikari, 2016), an alarming status for public health workers and environmentalists alike. The air pollution alone in Nepal increases the risk of lung cancer (Raspanti et al., 2016), but structural violence, such as relentless tobacco advertising to Nepalese youth, also contribute to these risks for developing lung infections and lung cancer. One way to combat such risk is through exclusive breastfeeding[1], which has been found to reduce lung infections in infants (Thapa et al., 2016). This highlights the importance of continuing maternal and child health programs throughout Nepal, although they are not typically linked with environmental justice initiatives.

Social factors are ingrained in the choices women and families make about infant feeding and care. Agricultural labor is more common in rural Nepal, where women are more likely to sustain breastfeeding (Khanal, Sauer, and Zhao 2013). Women in urban areas may perceive bottle feeding as “modern” due to exposure to Western advertising. Another social aspect that unfolds for maternal and child well-being happens in the aftermath of a major disaster, such as Nepal’s quake. After disasters and during humanitarian emergencies, one of the main items that people compulsively donate is infant formula (Gribble, McGrath, MacLaine & Lhotska, 2011). Well-intentioned individuals and groups see this as an essential item, partially due to the inaccurate assumption that mothers can no longer make breastmilk during stress. Mothers may experience a temporary decrease in lactation during extreme stress, but this is normally temporary and mothers can successfully continue to breastfeed. In our fieldwork in the tent camps, many mothers said that they felt that their milk was insufficient after the earthquake. When the perception of low milk supply is coupled with the presence of NGO’s handing out powdered milk or infant formula, the default choice may be to “switch to the bottle”. Bottles are difficult to clean effectively in a tent camp setting, and is therefore dangerous (among other reasons) to dissuade mothers from breastfeeding.

The combined social and geographic location of women and their infants makes their vulnerability striking but also complex. Low caste women and women without access to land ownership experience daily life differently in post-earthquake Nepal than higher caste women and women with land and other resources. During complex crises, even those who have land are placed in precarious situations, like the woman who had to sell her land to pay for the ambulance to help with the birth of her baby. If more of Nepal’s fuel was created by solar power, hydroelectricity, and other sustainable means, Nepal would have more protection against crises exacerbated through political tensions with neighboring nations (Khanal, Mishra, & DeYoung, 2016). The idea of economic independence through innovative environmental policies is not new or surprising. However, the failure to link environmental justice with social justice and ultimately public health outcomes - prevents scholarly advancements and successful community interventions.

We plan to continue our research in Nepal with future long-term projects that assess decision-making for choices about infant feeding, weaning, and possibly family planning. All of these aspects will likely intersect with the earthquake recovery as well as on-going issues related to development and sustainability. Two main aspects we think are important for future research would be to broaden our study area (throughout various regions in Nepal) and to collect a much larger sample of participants in order to gain a richer understanding of decision-making for infant care and feeding.

Figure 3. Women with a newborn in an urban tent camp

[1] Exclusive breastfeeding means breastfeeding without milk substitutes, solid food, water, or tea given to the infant. See Butte, Lopez-Alarcon & Garza (2002) for more information on the benefits and explanation of this concept.

Funds for data collection were provided by the Quick Response Grant from the Natural Hazards Center at the University of Colorado Boulder. The salary for the author during fieldwork was supported by NSF grant # 1331269. The Society for Community Research and Action (American Psychological Association, Division 27) provided funds for translation during data collection. Any opinions, findings, and conclusions or recommendations expressed in this material are those of the author and do not necessarily reflect the views of the National Science Foundation, the Natural Hazards Center, or the Society for Community Research and Action. Manoj Suji of Social Science Baha provided translation (Nepali to English and English to Nepali) during data collection.

Dr. Sarah DeYoung is an Assistant Professor at the University of Georgia in the Institute for Disaster Management. Before her current position, Dr. DeYoung spent two years as a postdoctoral research at the Disaster Research Center at the University of Delaware. Her PhD is in applied Social and Community Psychology from North Carolina State University. Her main areas of research are IYCFE (Infant and Young Child Feeding in Emergencies), community-based disaster mitigation (especially seismic mitigation), and behavioral aspects of hurricane evacuations. She is an advocate for safe infant feeding in disaster and conflict settings and works as a volunteer for safelyfed.org.