Coloniality Unplugged: Cosmologies and Terrains of the Dark Matter

This is the story of the development of the special issue…

Coloniality Unplugged: Cosmologies and Terrains of the Dark Matter

This journey started with a feeling - that emerged into a vision, a direction, and a process - but not a destination, psychology, racial justice, not limited by United States/Eurocentric perspectives, not confined by its definitions and vocabularies. A fire, an intention, embracing but not limited by the politics of coloniality. The psychological, the political, and the ontological as one. We knew it in our bodies, bodies that had lived inside and outside the United States - that had felt and carried the wounds of repression and the rage carrying rebellion through generations. We talked about paddling a canoe across the ocean, to a place that existed in our souls but not on a map, moved and guided by intentionality and purpose. We were okay with not knowing exactly where.

We had come together with our sights on an ecologically empathetic world, we wanted past harms accounted for, globally arrested development to come of age, and to open unfamiliar passages. This passage had started to take shape in a series of racial justice conferences that were held at National Louis University in 2016 and 2017. Racial Justice was the focal point of the conferences, explored through the lens of the Black experience in the United States, negotiated alongside the experiences of other ethnicities and cultures.

When the Black voice speaks to coloniality in the company of other ethnicities we are often, racially, in communion still with our oppressors. This is an existential risk for Black voices, which dare a strategy of community with those who have posed historical violence to us, but suffer violence themselves. We understood that colonial pathologies, racial hierarchies, and anti-blackness, are embedded, even if invisibly so, in most social relationships and experiences. Our critical conversations did not run from this reality; it was centered and laid bare. Through consistent conversations held within ever evolving groups, we shared our experiences. Black people living in the United States under incessant attempts, both undetectable and blatant, to disfigure our dispositions and consciousness, held conversations with racial others. The conversations cost. It costs the primarily Black voices solidarity of story, shared understanding, and safety. It costs non-black members the realization that you can’t cry freedom with your foot on someone else’s neck, and that solidarity is born of sacrifice. We had those conversations. We held the praxis of presenting story, negotiating community, paying the costs for doing so, and then doing it again, intentionally holding spaces that were painful, progressive, messy, disjointed, and profound.

Until this point, we were articulating and asserting racial justice within a framework of psychology. Decoloniality moved us beyond modernity, beyond justice, beyond race. It allowed us to see race as a form of social control and as part of a colonial matrix of power (CMP). Equality within a system of oppression was not the goal; neither was moving to a different position within the hierarchies. We began to understand how framing racial justice in the context of decoloniality would shift the context of the conversation and the work.

We knew that praxis/process was critical. This involved an exchange of resources and ideas between researchers\organizers and the community members\writers as a way of understanding that is guided by community needs, known to some as participatory action research. Communities of writers; not just people writing. This process took a longer time. We asked ourselves: How was my life impacted by coloniality and by metaphysical catastrophe? We began by telling stories of coloniality based on our own life experiences.

Indestructible and Interconnected Nodes of the (Rhizome) جذور

Articles in this issue are like different communities connected by bodies of water through the rhythms of the water drums. The articles are an assemblage of cultures of resistance and affirmation. They are all interconnected like a Rhizome, even though it is not always clear how. 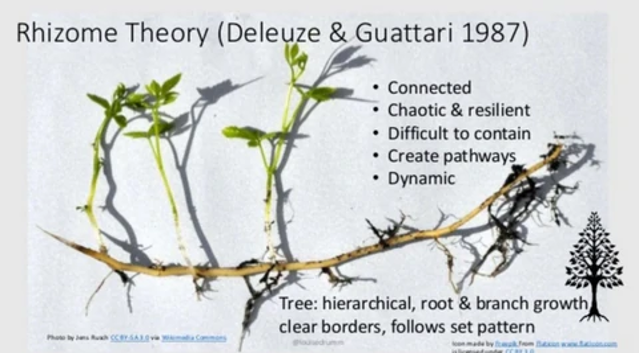 Interwoven in these stories is the larger context of the United States as part of the New World Project, including the Slave Trade, the US Civil War, Jim Crow, the Great Migration, the Industrial Revolution, WWII, the Civil Rights and Third World Movements, and the United States as a global superpower. Ultimately, the content of this issue is about creating space to make radicle connections and build decolonial villages.

We challenge community psychologists (including ourselves) to understand that what we are doing is not working. Currently our work is complicit in harm (i.e., modernity/coloniality), and yet it has the potential to be an affirmation of our radical roots and practices. We ultimately, with this issue, seek to radicalize approaches to psychology and embody decoloniality.

The journey to the village turns out to be part of a larger project to map the colonial and capitalist matrix of power, to critically question and reveal the interconnections of how it functions, to make it visible and to understand its evolution over time. Empowerment from a community psychological perspective cannot exist in isolation from this framework. It requires questioning, digging, and embarking on new ways of knowing in the service of uncovering its interconnected flows and functions.

During this process, we have been aware that editors often play a pivotal role in the production and dissemination of new knowledge. Editors are the holders of space and set the tone for how writing/scholarship spaces are cultivated. It was important to us that this experience nurtured and amplified, and did not disfigure, the voices of the writers, which further shaped the overall direction of the issue.

Language is colonial, it imposes a worldview, a cadence, a way of expressing knowing, which is often out sync with the author. With this issue our intent was to open a space which allowed for the author’s embodied ways of knowing (multi modal formatting, poetry, music, video, images.) Let us weave our spirits in a conspiracy of hope, humility, belonging, presence and possibility.

We invite, call on you, to consider, to think about, to use these articles as a non-dogmatic, unconventional “manual,” a kind of rules (stories and working principles) for radicals, for anyone who knows that something is not right in this world, to nurture you and your work. We look forward to hearing from you.

In radical healing, an other world is here.

Gordon Lee was born and raised on the island of Oahu, Kingdom of Hawaii. Part of a displaced diaspora, his mother’s family (his motherline) had traveled from the Pearl River Delta to the western coast of North America in the 1880s. After experiencing anti-Asian violence and Yellow Perilism, his great grandmother, on her way home, left the boat in Honolulu, pregnant with her second child. After giving birth to a daughter, his grandmother, remained in Hawaii and never saw her family again.

As a result, he grew up in what was then called the Territory of Hawaii, a euphemism for what was and still is an occupied nation. His first realization of coloniality and of his own story arose during a period of political upheavals in the United States, Hawaii, Asia, and Africa in the 1970s. For much of his life he has unknowingly carried the trauma of his ancestors. His grandfather was shot and killed. His father, as a youth, felt the colonial matrix of power firsthand in China (No Chinese or Dogs Allowed!) and throughout his life in the Hawaiian colony.

His work with space, healing, and re-membering began in 2007 when he was invited to join a pilgrimage to the Manzanar Nikkei incarceration site in the eastern Sierra Nevada Mountains. He taught Asian American studies at San Francisco State University where he practiced social biography and critical/liberation andragogy and first experienced the classroom as a village. His work has been guided by questions related to psychology and its relation to social justice and ontological change; collective trauma and the shadow of empire; psychosocial biography and decolonial stories, and space as a site of re-membering.

Dr. Lee was President of Psychologists for Social Responsibility (PsySR) in 2016. At PsySR he supported a vision of racial justice, relationality, and decoloniality; he advocated a critical role for psychology in the struggle for racial justice; and he helped to vision and facilitate the co-creation of decolonial spaces and projects. He co-initiated a series of conferences that addressed the relationship of psychology and racial justice (that is referred to in this special issue). He was part of the original team that created the project from which the writings in this issue emerged. He is also a part of the village and was a co-holder of that space. He has written on pilgrimage, on community based decolonial projects, on community psychology, and on Asian American activism.

Hana Masud, PhD is an adjunct lecturer and researcher at the University of Massachusetts-Boston. Her research and practice focuses on the coloniality of mental health services, its impact on re-colonizing local resistance, and radical collective trauma healing for local and marginalized communities in Occupied Palestine and Chicago. Her PhD dissertation explored “embodying decoloniality indigenizing psychological practice and pedagogy”. Dr. Masud is the co-chair of Decolonial and Racial Justice in Praxis group, an initiative of Psychologists for Social Responsibility. The group is a virtual space that brings scholars and practitioners from around the globe to reflect on the impact of coloniality, begin the healing process, and develop strategies to overcome and abolish colonial practices and systems.

Ericka Mingo holds a PhD in Community Psychology and is currently an Assistant Professor of Applied Behavioral Science and Community Psychology at National Louis University. Dr. Mingo is a certified teacher in Illinois, with a MAT in Secondary Education. Ongoing research interest include the ecology and praxis of lateral community building, often through the lens of education, experiential learning and ways of knowing, and Pan-African liberatory psychology. Currently Dr. Mingo is engaged in an exploration of urban agriculture, as a vehicle for food security and ecologic entrepreneurship. Dr. Mingo taught at the high school level for over 16 years in Brooklyn, NY, Kansas City, MO and on the South Side of Chicago. She is the Executive Director of Ecologic Outreach, a nonprofit urban farm on Chicago’s Southside, the Past President of Psychologists for Social Responsibility, Faculty Chair for National Louis University’s Black Student Union, Co-founder and faculty planner for National Louis University’s Environmental Justice Group, an active member of and advisor for the Racial Justice Action Group, and many other local, national, and international community organizations working towards sustainability and justice.