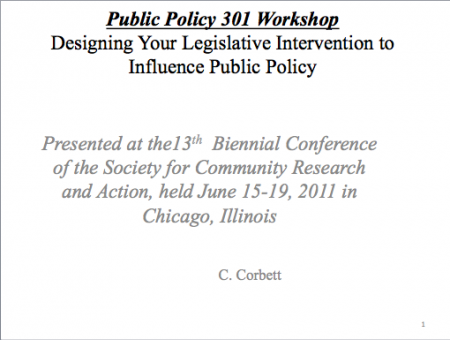 Abstract
This workshop is a new addition to the Public Policy 101 and/or Public Policy 201 workshops presented at SCRA’s Biennial Conferences since 2005 (Corbett, 2005, 2007, 2009).
This workshop, similar to PP 101 and 201 will advance the longstanding visions of various SCRA Presidents from 1998 to present that conclude public policy has been neglected and should be a high priority within SCRA.  This includes former Presidents Bond, Maton, Solarz, and Toro, such as detailed in their Presidential Columns in The Community Psychologist, 31(3); 32(2); 33(1) and 36(4) or in a Presidential Address on the future direction of the field, such as in The American Journal of Community Psychology 35(1/2) (p. 3-6).  More recently, Elias notes the keen need for attention to public policy and proposes a three year priority, as detailed in his Presidential Columns 41(3/4); 42(1); and 42(3).  Further, he states that SCRA influence on public policy at multiple levels of government is “…long, long overdue”, The Community Psychologist 42(1), p. 2.

The workshop also furthers training in Advocacy and Public Policy, proposed by Scott (2007) as one of the core competencies of CP training and it advances a future vision proposed to promote the professional development and continuing education of SCRA members at all Biennials through Workshops offered throughout the Conference (Corbett, 2008a, 2008b, 2009), as noted in The Community Psychologist, 41(2); 41(3/4) and 42(4).

While the focus of the Public Policy 101 workshop is on preparing pre-filed written testimony and testifying in a hearing and Public Policy 201 is designed to help community psychologists empower group advocacy to influence legislators, the goal of Public Policy 301 is to help participants design and develop their own legislative intervention, based on the advocacy issue or social justice cause of choice.  This is accomplished by describing a legislative intervention designed to advocate incremental funding for housing to allow the disabled in New York State to live in the community, consistent with the Americans with Disabilities Act of 1990 (ADA), the Olmstead Decision of 1999 and New York State’s Chapter 551, Article 25 implementing Olmstead (Corbett, 2009), The Community Psychologist, 42(3), (p. 31-34).

Two more examples of legislative interventions and opportunities will be examined to illustrate commonalities and enable participants to apply similar principles, designs and strategies to the advocacy or social justice issues relevant to them.  Participants will also explore whether, and if so how, their selected advocacy or social justice issue of choice should be influenced by a realistic assessment of the prospects for success.

The workshop furthers exposure and proficiency training objectives (Corbett, 2008, 2009) by empowering participants to design and develop their own legislative intervention.  The workshop has potential value to anyone interested in designing legislative interventions in an effort to influence public policy, as well as CP faculty who may wish to add the Advocacy and Public Policy core competency to their graduate training programs to serve all students that seek training in public policy intervention. 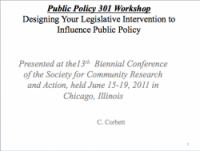 Christopher J. Corbett is a master’s level community psychologist and member of SCRA (Society for Community Research and Action), ARNOVA and ISTR since 1994.